Last month, where I work they had an award for the “Outstanding Woman of the Year”. The category this year was “Women of the Vote”. One name immediately jumped to my mind. Denise Katz. When I first met her my first thought was that she is a professionally nice person. Not only that she was only steps away from where I work now. So I filled out the form with a glowing review. Who could be more important to the local region in what was a transformative vote. I even suggested that there might be advantages in recognizing a winning team. Of course I also knew that a different political opinion prevails on campus. Thought maybe there could be some respect for success. 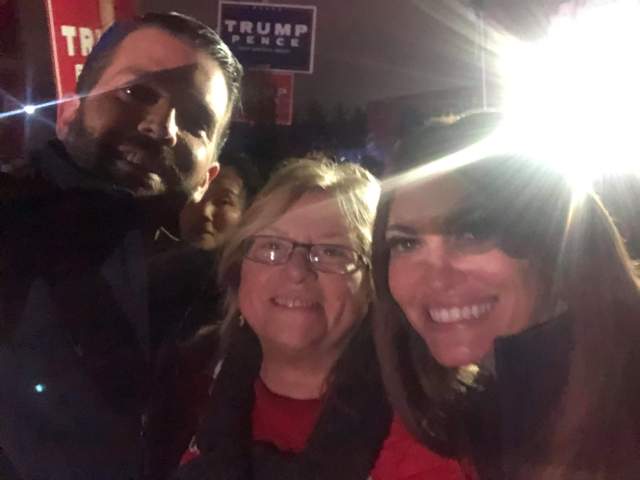 Here is Denise with Donald Trump Jr and Kimberly Guilfoyle. I am impressed, with the time and effort that Denise puts into politics. I just spent some time putting up some signs years ago. One of my impressions at the time was how many women were involved in politics. Then there was their passion. The most passionate were definitely women. The guys that I meet just felt it was logical to support our candidate. Having been part of the campaign I had an insiders view, I saw what the media said about the campaign was a lie. I speak from first-hand knowledge. Yes first-hand knowledge from inside one of the most transformative campaigns in American history. Yet my knowledge was much less than the knowledge Denise had. Yes, she would have a much better story than I. I believed that the story would be educational to share. So even if the school did not believe in the result, would not it be good to know how such an insurgent campaign worked? I thought it would be good to get past the falsehoods, and recognize the truth. 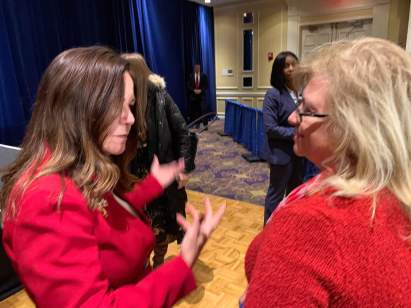 Here is Denise engaged in conversation with Karen Pence, wife of the Vice President. Now Karen may not be the most influential person in the land, but I bet she would be right up there. Would be even more important, her insights on how things work in the White House. As I would say, how the political machine works. For those of the opposing political view, think of the influence of Jill Biden. Wouldn’t it be good to have her as a friend? So I offered my friendship with Denise to the school.

The school then chose Liz Tentarelli for Outstanding Woman of the Year. Liz is President of the New Hampshire League of Women Voters. I guess that is impressive, however I had no clue about what she had done. So I Binged her accomplishments. I think my dad would have liked her. Anyway the most defining accomplishment that I saw was something to do with the legal definition of domicile versus residence. Not that the importance was explained.

So there I was left with a bit of a meh feeling about the Outstanding Woman of the Year result. I recognize that there is passion for politics on both sides. How could you forgot the passion of the Pink Hatted Ladies after the election. I did not agree with the politics of the Pink Hatted Ladies, but recognized and respected their passion. Yes they are the ladies of outstanding verbiage. So when it comes right down to it, I guess I am not surprised that the award would go to a lady that is proficient in verbiage.

So I do not know who all these ladies are, however I think I prefer their use of verbiage. So I have come out with an award of my own. “Outstanding use of Verbiage”. It take a bit of skill to use creative verbiage. So for the time being I will anoit the overly verbose with my own recognition of their creativity, and respect for their passion.

When it comes right down to it, it is the creative turn of the verb that made the Democrat Party what it is. So is it is absolutely righteous to award the verb?