I, unsurprisingly, was impressed with Trumps little show. For a show that was produced in a single day it was informative and inspiring. Unfortunately the best bits were cut out by the network’s. One of the best parts there were no commercials. If Donald J Trump were to start a network, I would watch.

Shortly before the Trump event started I tried to give donation to http://donaldtrumpforvets.com and the website would scramble my credit card number as I tried to enter it. I did try and reboot the phone, still no joy. A short time after the event started the website crashed. For fun I tried it again, still no work. I could try a different device. Guess Trump once again does not want my money, Cool. Guess I will just put more gas in the Trump Truck and drive around. As for any possible veterans reading this, I hope you do not mind.

I am pleased that Donald J Trump is standing up to the massive problem of media bias. I do plan to contribute to his foundation tonight as thanks.

Donald J Trump says he will skip the FOX design debate this Thursday and put on a bigger better event in Iowa to benefit Wounded Warriors and veterans. Which are you going to watch? Trump takes on the media.

It will be nice, after twelve years, to see someone take a proper oath of office. Shocked that the oath of office has been flubbed the last two times.

As soon I earned my drivers license, I ended up sitting in a gas line during the Arab oil embargo. I learned that the Arabs have their hand on the spigot, if we want oil, we pay. Also I have been told that we are running out of oil, and we will have to change our habits. Granted, full size trucks of today, are more efficient than cars of yesterday. However we are driving more. So why the price collapse? Does oil really grow underground, as is it is a really really huge growing biomass that we just tap into, then tell everyone that it is a finite supply to justify the high price. Or are we able to buy oil from privateers who are undercutting nationalized pricing? A combination of both? Or has the house of Saud simply opened up the spigot nice and wide in an effort to put all competitors out of business? What happens when they eventually close the tap?

One is outdoorsy, the other is metro (take your pick). They both excelled in their local political environments. They both were good at basketball. One went on to be president. They both make Donald J Trump look good.

Of the 5 people that I know that shook Donald Trumps hand, two drive Dodge pickups, two drive hybrids, and one drives a Volt. Just saying. 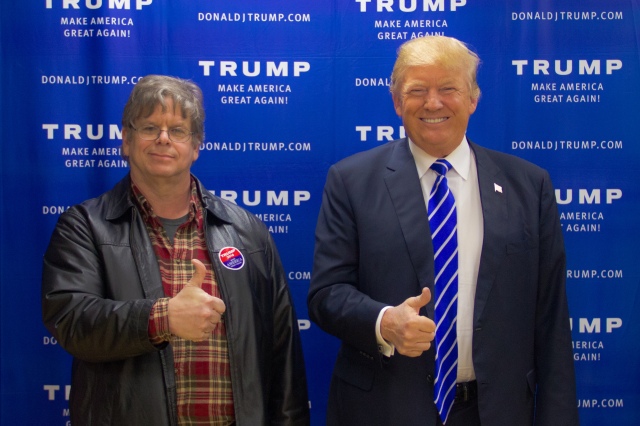 What a privilege. A proper thumbs up, along with a proper handshake.

At the Claremont Trump rally I and a few other supporters had the opportunity and privilege to shake Donald Trump’s hand. We waited for a time in a small room until he arrived. I thought about how should I shake his hand, and the meaning of the handshake. Mentally I figured just to go for the simple handshake. Then the time came and I was ushered up to Mr Trump. He extended his hand, I looked at his hand grasped it and shook several times. I exclaimed “A Firm Grasp” as I went to look him in his eye. As soon I glanced he snapped around and looked at the camera with a proud thumbs up and one of the most practiced smiles I have ever seen. I quickly followed suit. At some point his photographer will send me a photo.

It is not every day that I get to shake the hand of someone with Donald Trumps stature. It was a warm firm handshake, and on reflection, it was the ernest handshake of someone wanting a job.