Denmark is an example of a country that Bernie Sanders finds to be model of civilization. Ted Cruz says that Donald Trump is so unhinged that he would nuke Denmark. The next day a WSJ-NBC poll places Ted Cruz in the lead nationally. The people of Denmark are absolutely bewildered by American politics.

I heard my name so I turned around, and the man says “I know you” I replied “You do?” “Yea, your the guy with the truck”. And that was my introduction to Donald J Trump Jr. 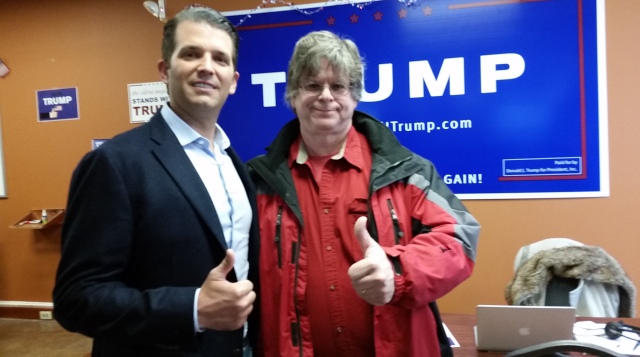 There you are he said as he pointed to a picture of my truck on the presentation board, what an introduction. I had sent myself up! After a mention of New Hampshire’s famous poet and his poetry I started talking about my grandmother, who was a student of Robert Frost. Then onto my family, who have been on the same modest farm since the revolution. However I continued that my life is good, nice house, nice wife and cars. Then onto my reason for being here, to support you and your father. What you are doing is revolutionary, I have never seen anything like it in my lifetime I said. About the truck he asked, I replied that reactions are phenomenal, really positive across the spectrum. The only really nonreaction was on the Dartmouth College green. Many thumbs ups and horn blowing. As it was the eve of the election he asked what I thought about the polls. My reply was you will have it by double digits. Turned out I had it a little wrong, they had double the voters as the second place candidate.

We had a couple of laughs, we shook hands. I mentioned that he has the same proper firm handshake as his father. Then my best line, I said that when I was in manufacturing, I hired many people with a handshake, and I would hire you. Also I mentioned to him that we appreciate the hardships that his father’s candidacy will have on the Trump family. Finally as he was leaving, I said that your journey is just beginning.

I would like to think, that when Donald J Trump Jr returns, he will remember me.

Last summer my wife decided she liked Donald Trump, so I signed up on his website for more information. I went to a couple of information meetings and attended the debate watch get togethers. I was named a town chair and even had my photo taken with Donald Trump at one of his rallies. It was all good. Then I received emails that they wanted me to make phone calls on Donald’s behalf. I do not like receiving phone calls, let alone making them. So I replied that like Donald Trump I was going to take the road less traveled ( this is generally a reference to Robert Frost’s The Road Not Taken ). It was my plan to take the Trump Truck on a two day tour of the State. During my tour I stopped at the Keene office to pick up some signs for a friend. They were thrilled that I had stopped, I related how much people love the Trump Truck. My next stop was the Robert Frost homestead, I thought the poem “Mending Wall” was also appropriate for the campaign. At the farm I took a selfi and sent a copy to Denise at the Keene office.

When I was at the Keene office I asked about an invitation to meet Donald Trump at the Office, turned out to be Donald Jr would be there the next day. I would return!

I did not watch last night’s debate, however it seems Donald J Trump repeated one of the Democrats favorite lies about George W Bush. As in “It’s Bush’s fault”. Now I find that to be terribly funny, all the pandemonium! The best part is, to prove Trump wrong. The press will prove that it was not Bush’s fault.

People’s reaction to the Trump Truck was phenomenal. I drove the truck around before the election. Reactions were consistent and almost always positive. As I took this photo, a lady jogging by with her dog gave a big thumbs up.

The local Community Post Office used to have one employee and great service. Now they have three employees, have cut the hours, and the service is not what it once was. Worst of all. Last fall the furnace at the Post Office died or was condemned. So they brought in a big diesel generator, and have been running electric heaters all winter. There has to be a better way.

I like machines, I like working with them, tuning them up, running them. I have spent most of my life in manufacturing, and am good at it. Recently there have been a couple of jobs I really wanted. One at a wind farm, the other at an airport. I never even had an interview. I think it was because they were union jobs. Not sure, just a hunch. I like machines.

Reflections illuminate the past to guide us into the future…

The source of the light must come from within.

Donald Trump has been criticized for flying home to New York at the end of his campaign day. I have no problem with that. I love the comforts of my own bed. He should be entitled to the comforts of his own bed.