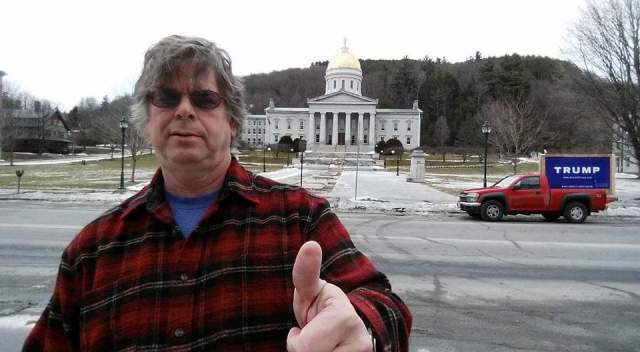 I enjoyed the Bernie TV commercial with the Simon and Garfunkel song, “Gone to look for America” In tribute to Bernie, I drove the Trump Truck across Vermont Sunday the 21st. Vermont is not as much into politics as New Hampshire, however I did get the usual Thumbs up, and horn tooting. Just not as many. Interestingly the college town of Northfield had a number of positive responses, unlike Lebanon NH that did not have any reaction whatsoever. On the way home I hit the highway, in addition to the thumbs up there were people taking pictures with their phones, some thumbs down and a few fingers. I am ok with the thumbs down, and I think the fingers are rather rude. However I was totally unprepared for the black sedan that tried to run me off the road. The last time I had to take such evasive action, a deer was just feet from my bumper. The black sedan purposely and willfully encroached on my right of way sending me into the breakdown lane with my brakes on hard enough to send the stuff under the seats forward into the footwell.